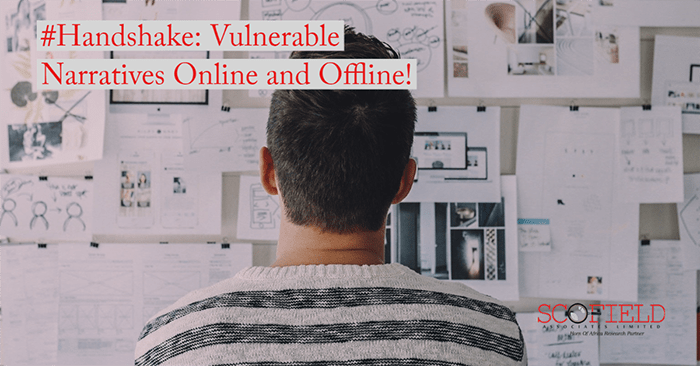 An upcoming study on online/offline engagement by violent extremist organisations. Interested? Any stakeholder with contribution and interests on the research can reach us through email with the subject #Handshake; the vulnerable narratives online and offline at: research@scofieldassociates.co.ke.

General analysis of available data on internet use by terrorist organizations has provided the conclusion that the internet delivers more opportunities to become radicalized.[2] It also serves as an echo-chamber, and increases the opportunities for self-radicalization. However, the internet does not increase the speed of the radicalization process. It only serves as the “hand-shake exchange” between face-to-face engagement and interaction with the terrorist organization gatekeepers.[3]

This hand-shake exchange is managed through relations that happen in clusters that include both online and offline engagement; while not conforming to the linear motion that is assumed of the counter/alternative narratives developed. This multi county study intends to review the processes of narrative development, engagement, and onward spread through the medium that is the internet. Recommendations derived from the research will provide a guide to the relevant stakeholders and policy-makers for developing counter-narrative strategies that respond to the context in Kenya and the region.

Introduction – While radicalization is a process that is contextually influenced, recruitment is a combination of ideological motivation, detachment from local politics and the presence of preference, and interest of the individuals involved. Findings from a study containing 16 recent incarcerated terrorists and returnees in Kenya, suggested that the process of recruitment involved face-to-face engagement, and hybrid engagement (face-to-face and internet). There is concerned about the level of radicalization and recruitment in new geographical areas (new hotspot counties) including Eldoret, Nyeri and the larger Western Kenya.[4] Recently there has been news showing young individuals arrested in Siaya in a recruitment ring, with links to Al-Shabaab.[5]

What is clear is that the Al-Shabaab has adopted a media strategy like that from Al-Qaeda. Most of the online messaging has focused on information development, and ideology progression with limited use on command, control and attack planning.[6] In addition, Al-Shabaab has used Twitter as the social media option of choice longer than any other violent extremist organizations in Africa.[7] The analysis from the #Westgate, showed that Al-Shabaab’s intended audience for the twitter engagement was the Kenyan public, sympathizers, and the Kenyan Government, respectively.[8]

Al-Shabaab has also used physical space and virtual spaces to win the hearts and minds of communities in Kenya. The media strategy from Al-Shabaab has included the use of face-to-face engagement, multimedia engagement (CDs with sermons and information), Online engagement and individual handover (also referred to as “hand-shake exchange”). This hybrid format has worked for recruitment from the Horn of Africa region with only one documented evidence of Internet only (recruitment of a female suicide bomber).[9] The hybrid system has utilized online and offline communication to support Al-Shabaab’s outreach.[10] It includes the creation of publicity, propaganda, radicalization and recruitment and networking, with CDs from Aboud Rogo, online sharing of Gaidi Mtaani (Terrorist on the streets) and social media engagement featuring prominently.

However, the absence of sufficient data or solid empirical research to predict the linkages, trends and outcomes of online radicalization is wanting. Lack of data that tracks such trends or measure its contingencies, the degree of online use, reliance, and recruitment success, is also missing. Evidence from desktop research shows that social media platforms including @HSM_Press, @HSM_PR, @HSM_SUPERSTARS, @Hamed_Alali, @alemarahweb, and forums like al-sihad al-alami, Atahadi, al-furhan, Ansar al-Mujahideen, al-islamiyah; are sample online presence that have either been shut down or evolved into new name options.

The identification of higher learning institutions and Maskani’s as a major risk for radicalization and recruitment has been on the radar for the government of Kenya and the communities. The Rapid County Action Plans (RCAPS), and the first-generation (County Action Plans) CAPs both allude to the challenges and opportunities that learning institutions and Maskani’s provide to violent extremist organizations. Apart from the presence of shareable media containing extremist information, the “hand-shake exchange” engagement in these spaces make it easier for agents of recruitment, who ride on lesser restrictions for accountability.

There is limited empirical data on how the at-risk population in Kenya transition from offline to online engagement and back. Additionally, there is limited data on the impact from the online engagement and its influence on radicalization and recruitment. It is also not clear how the vulnerable individuals interact in the online social spaces, and how such engagements if any; are converted to logistical planning for terrorism as seen during the Dusit-D2 attack.[11]

With funding support from the Netherlands Embassy, Scofield Associates will conduct a research that provides a narrative assessment and a trend analysis of violent extremism; linking the online to offline radicalization and recruitment.

Methodology – Empirical data on narrative development and sharing is considered private to a selected circle that is within the influence of violent extremist organisations. However, using various mediums that include the internet, and the interactions between communities and vulnerable individuals, the “hand-shake” process enables the movement of narratives to happen. To capture this process, Scofield Associates will use a two-prong data collection method that includes fieldwork to engage with communities, and online sentiment analysis of the narrative samples identified during fieldwork.

Research Objectives – Online radicalization and recruitment leading to terrorism is a soft power approach implemented by violent extremist organizations. This moves away from the use of force and coercion to affect change; towards a more carefully planned, subtle, methodical, and tactical routine. For a sustainable response, research with a learning component is crucial. This study will focus on the three areas of inquiry;

Results – Recommendations derived from the research will provide a guide to the relevant stakeholders and policy-makers for developing counter-narrative strategies that respond to the Kenya context. It will identify audiences at-risk of online radicalization and embrace for violent extremism that can lead to terrorism. Additionally, the research will provide guidance to develop action-oriented activities with local stakeholders and online responders.

Discussion – Narratives are viewed as essential aspects of seduction for terrorism. The online institution put in place a strategic shift where the weaker party in asymmetrical warfare dispersed relationships through a giant open network using narrative modelling.[12] From the online institution that disseminated Al-Shabaab narratives Ahmed-Iman was used as the face to normalize the conversation and contextualize the issues.[13]  However, while the online space provided an avenue for furtherance of the narratives, offline discussions also facilitated the engagement and linkage of the diverse stakeholders in the violent extremism narrative spectrum. This study provides an opportunity for reflections; to evaluate the online/offline engagement, and to provide recommendations that serve alternative narrative program development in Kenya and in the Horn of Africa.

Conclusion – The resilience of any terrorist organization is not dependent on the number of trained members from the past but in its ability to continuously recruit, mobilize and animate both actual and would-be fighters, supporters and sympathizers.[14] When a collective of people come together, they share specific perspectives and a unitary identity resulting in sub-cultures or a community also categorized as radical milieus.[15] Radical milieus are specific social environments whose culture, narratives, and symbols shape both individuals and groups.[16] The growth and expansion of the internet has created these sub-cultures and communities and view the online space as an institution. This institution has ensured its utility by social organisations including violent extremist organisations (VEO).[17] Vulnerabilities associated with the internet are ever-increasing with scholars cautioning the capacity for the institution to mold, rationalize and normalize behavior that is radical and extreme. This study will provide empirical insights in this field.

Stakeholder engagement – Scofield Associates believes that this study would not be a reality without the support from the local partners and the community. To this end, Scofield Associates welcomes views and comments to support the research process and local engagements at the community level. Additionally, any stakeholder with contribution and interests on the research can reach us through email with the subject #Handshake; the vulnerable narratives online and offline at: research@scofieldassociates.co.ke.

[2] Ines Von Behr, Anais Reding, Charlie Edwards, and Luke Gibbon, “Radicalization in the digital age: The uses of the internet in IS cases of terrorism and Extremism,” Rand, (2013).

[12] Robyn Torok, “Developing an explanatory model for the process of online radicalization and terrorism,” Security informatics, 2:6, (2012).

[15] Avner Barnea, Challenging the “Lone Wolf” Phenomenon in an Era of Information Overload, International Journal of Intelligence and Counterintelligence, 31:2, (2018), Pp.217-234

[16] Maura Conway, From al-Zarqawi to al-Awlaki: The emergence and development of an online radical milieu. CTX: Combating Terrorism Exchange, 2 (4). (2012), pp. 12-22; Peter Waldmann, “The Radical Milieu: The Under-Investigated Relationship between Terrorists and Sympathetic Communities,” Perspectives on Terrorism vol. 2, no. 9 (2008).