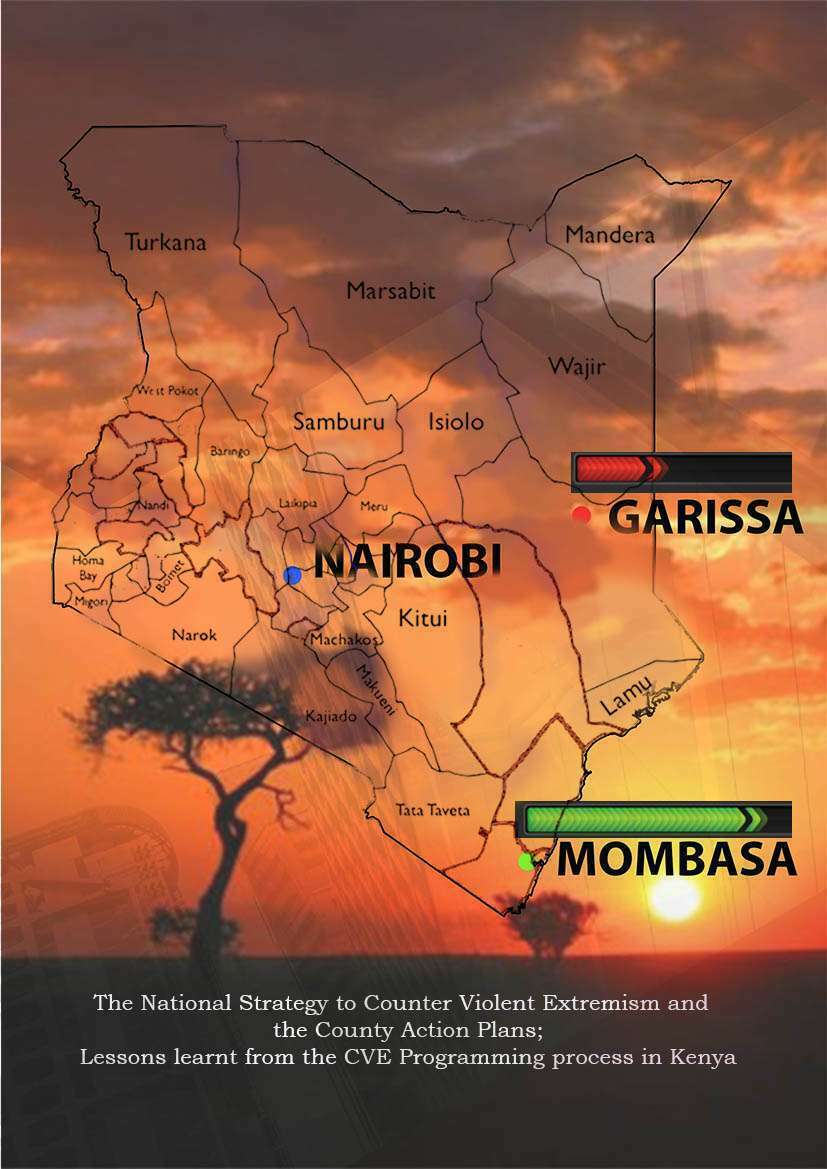 In September 2016, Kenya launched her National Strategy for Countering Violent Extremism (NSCVE) with the goal of “rallying all sectors of Kenyan social, religious, and economic life to emphatically and continuously reject Violent Extremist Ideologies (VEI) while shrinking the pool of individuals whom terrorist groups can radicalise and recruit.” Led by the National Counterterrorism Centre (NCTC), the strategy was developed through extensive collaboration at the government level, with the other non-state CVE implementing stakeholders claiming they were not sufficiently consulted. The strategy proposed to acknowledge the complexity and contested nature of defining Violent Extremism (VE) and explore the phenomenon of Terrorism; through its acts, the threats it poses, impact and its overarching significance; not just in security but social-political realm. The strategy sought to promote patriotism for Kenya’s nationhood, enhance the Government of Kenya’s (GOK) support for at-risk communities, rehabilitate and reintegrate returnees, roll out non-coercive approaches to Countering Violent Extremism (CVE), utilize law enforcement to deter and prosecute radicalisers and accommodate research on the evolution of Violent Extremist Ideologies.  The president’s statement during the launch of the National Strategy document in 2016 included a keen avoidance of an “insidious spread of an evil ideology,” and identified Terrorism as a domestic challenge whose response included a multi-agency security operation, resulting in a sharp increase in operational tempo to “Detect, Deter and Disrupt” the activities of VEOs and Terrorists. It was a shift in policy, as earlier activities considered a response to an external threat that only affected Kenya as part of collateral damage.

The identification of the problem as domestic was a great starting point as it provided the government with an opportunity of developing responses that targeted the internal drivers of Violent Extremism, while engaging local non-state implementing partners. However, the framework within the NSCVE was not keen enough to name and understand the local dynamics and context, as shown in the report. Though the document provided an agenda and thematic areas of dealing with VE and Terrorism, it lacked alignment to the acts of parliament and new policy skeleton to deal with the continually emerging phenomenon that is VE and Terrorism. Additionally, the document covered both Violent Extremism and Terrorism in its explanation, and specifically included a security pillar to respond to Terrorism as a phenomenon. It defined returnees and proposed the importance of rehabilitation and reintegration in the community, but it lacked a procedure to support this chronicle, and the outcome resulted in a public proclamation of amnesty on returnees that conflicted with the Suppression of Terrorism Act and Security Amendments bill. The need to protect the State from a faceless enemy resulted in actions and activities that were dependent on the possibility and not probability.

This report covers research work that was conducted between July and October 2018, documenting the lessons learnt from P/CVE programming in Kenya. This study  provides; an understanding of the VE trends in Kenya, a review of the process  adopted in the development of the NSCVE as well as for the County Action Plans(CAPs), and the interplay of the different statutes in place for VE related activities. The research covered a discourse analysis of Violent Extremism and Terrorism vis-à-vis its interpretation and implementation through the NSCVE and the CAPs. The fieldwork included a qualitative stakeholder analysis with the lenses of investigating what works and in what context as guided by the NSCVE and the CAPs. It utilized data triangulation and mixed method in its analysis to incorporate fieldwork (Nairobi, Mombasa, and Garissa), desktop data from existing strategies (Kwale, Isiolo, and Lamu), a contextual view of the transnational threat, and lessons learnt in the region and globally.  A tiered sampling method that focuses on purposive clustering was used to select respondents for the study. Based on the clusters that included government representatives (members of the county government, national government administration, district peace committees and law enforcement teams); non-state actors (Organizations and agencies implementing CVE programs, representatives of the business community) and the community members. The method focused on an ethnographic approach of in-depth interviewing through Participatory Systemic Inquiry (PSI), seeking to elicit lived experiences from those in the community.

This report is divided into seven chapters that critically review the conceptualization and operationalization of CVE, VE and other associated concepts in Kenya by supplying a context-specific historical term framing. It also reviews the consensus building process and coordination of various stakeholders and their competing interests in development and the resultant responses from the state, international partners, and Violent Extremist Organizations (VEO). It affords an overview of the trends of Terrorism and Violent Extremism in the country; while focusing on the change from collateral damage narrative, to direct target after the US Embassy bombings in 1998. It goes further to offer a clear sign on the understanding of community definitions of Terrorism, and Violent Extremism; an analysis of Kenya’s state categorization of the two, and the responses taken in the past. The report also supplies a basic understanding and overview of the NSCVE while indicating some progress made since its launch, mentioning the gaps available and providing the opportunities for future engagement.

It incorporates a discourse analysis, as a prerequisite for describing, interpreting, examining, and critiquing P/CVE processes in Kenya. The argument made in the framing of terminology is premised on the notion that at times the spoken discourses leap forward and direct action faster than the written discourses that are the CAPs, and the NSCVE. The report shows the definition challenge VE and Terrorism that depends on the interests, actors, and responses needed. The NSCVE and CAPs do not account for context, boundaries of included parties, response options, and actor representation. The discourse analysis provides a historical grounding on the terms and the legal structure that governed the hard power approaches from the Government. The report also identifies the escalation of legal jurisprudence  in the aftermath of the 2002 attacks in Kenya to include the 2006-Suppression of Terrorism Bill, the 2006-Witness Protection Act, and the 2009-Proceeds of Crime and Money Laundering Act, 2012- The Prevention of Terrorism Act in October, Security Laws Amendment Act in December 2014 and Kenya Defence Forces Amendment Bill 2015. The report acknowledges the fact that NCTC was in the process of reviewing the National strategy and may have taken some findings and recommendations into account.