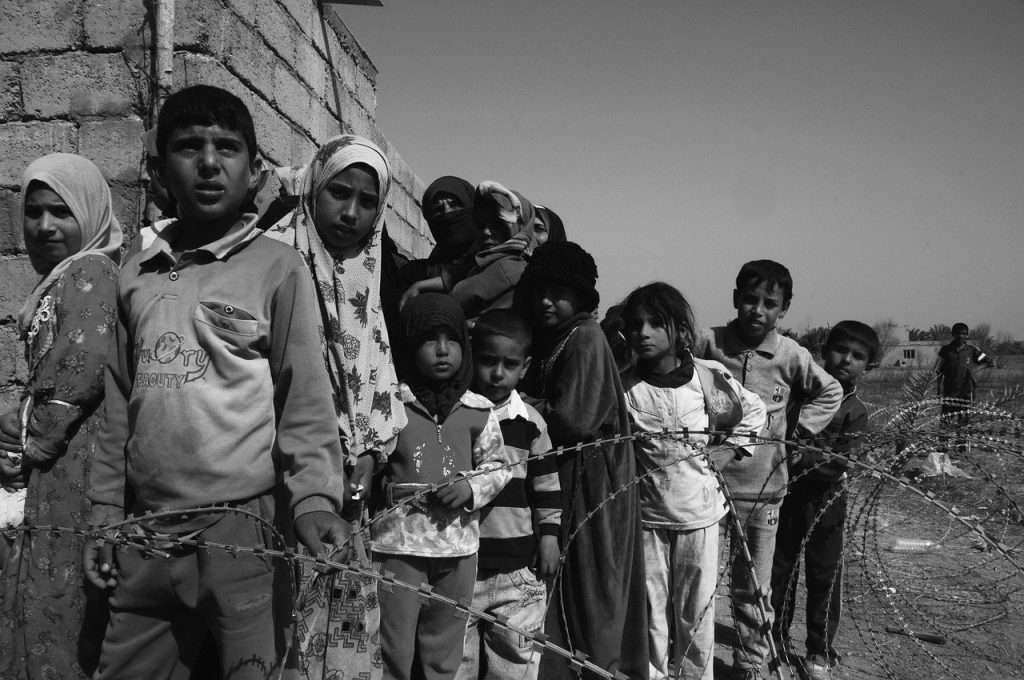 “How a family reacts to environmental threats is contingent on the harshness of the change they experience, their particular vulnerabilities, and available assets.”

Hardly a day goes without the Horn of Africa dominating the news headlines. The ascendancy is usually in the form of issues related to geopolitics in the region. Factors ranging from elections to refugees and even the question around climate change, plague conflict management strategies in the region. Climate change and the refugee crisis has been discussed in the context of humanitarian catastrophes but not as a contributing factor to the shifting conflict systems in the regions and more specifically; to the challenges relating to terrorism. The relationships between climate change, migration, and its interception to preventing violent extremism (PVE) activities intersect based on a model of analysis for programming developed by the journey to extremism report by the United Nations Development Program (UNDP, 2017). The analysis provides a three-tier level activity grouping that views program activities into PVE specific activities (pull factor focused activities), PVE – Related activities(push factor focused activities) and those PVE – Conducive activities (larger development-focused activities); that look at a wider perspective.

Violent extremism in the Horn of Africa region is the result of a plethora of complex and locally specific factors. These factors include; grievances against the state, identity issues, exclusion and inequality, marginalization, lack of opportunities and ideological dimensions. As a phenomenon that is increasingly contributing to instability, it needs careful analysis at country-level, local and at the regional level. Additional focus should be placed on high-risk and sensitive areas such as cross-border regions, urban and migrant reception areas and migrant journey routes(EU Emergency Trust Fund, 2016). Even though a clear trajectory from migration to terrorism and climate change may not appear; a relationship between the two issues abound as they both play a role in the conflicts of the region.

While famine is often associated with dangerous weather conditions, the Global Report on Food Crisis 2017 makes it clear that armed conflicts form part of the driving causes in nine out of ten of the worst humanitarian crises, thus emphasizing a close link between peace and food security(Swiss peace, 2016). According to the World Bank; “how a family reacts to environmental threats is contingent on the harshness of the change they experience, their particular vulnerabilities, and available assets” (World Bank, 2008). To cope, families adopt a myriad of adaptive stratagems including diversification of agricultural methods, non-farm work and using social sustenance systems. For example, in the current crisis, Somali diaspora systems are marshaling efforts on Whats-App to raise money for their clans and sub-clans affected by the famine. Nevertheless, when conditions deteriorate into protracted chronic situations, groups are forced to recourse to “distress migration.” which is internal and temporary, and in the long-term, become regional.

Available data from the Horn confirm that more internal displacement is being registered than cross-border migration. Even so, it is impossible for internally displaced persons (IDPs) to continue cultivating their fields and provide for themselves. It is also often dangerous or completely impossible to get hold of external food aid. Low agricultural activity, large-scale crop catastrophes, and insecure transport routes resulting from robbery and armed conflicts, have also brought trading to an almost standstill. In other areas, the result is an explosion in food prices. It does not mean that cross-border movement does not happen. Ethiopia, Kenya, and Uganda have received the largest influx, leading to poor conditions in refugee camps, inability to successfully integrate with local communities. The refugees’ deprivation may have contributed to alternative option seeking by some of the refugees.

Conflict and violent extremism(VE) also impart on the mortality rate of refugees as some of the refugees run to seek safer grounds, while others utilize this process as a loophole to achieve their goals. Most of the refugees lose their lives trying to flee from their war-torn areas/ countries. It has also contributed to broken families as most of the refugee’s loose contact with their loved ones while others get lost in the process of fleeing from conflict. New drought-related displacement in Somalia reduced in May 2017 and June 2017 as compared to previous months; however, the number of people displaced by conflict and insecurity in central and southern Somalia increased, with nearly eight thousand three hundred households approximately 50,000 people fleeing conflict during the two-month period, according to the UN. This increased movement may be seen as a threat especially considering that most of the movement is happening so close to the Kenyan border from the Somali town of Elwak. How can we differentiate between those who are looking for food and Al-Shabaab interests in the region; because the organization is still blocking aid to some areas where they have control.

The constant conflict between communities hinders the ability for agriculture and agri-business activities to flourish in such contexts as witnessed in Northern Kenya for example. The government of Kenya (GoK) has had to deal with a large number of refugees emanating from Somalia and other neighboring countries due to armed conflict and VE. The latest figures indicate that nearly seven hundred thousand people have been internally displaced since November 2016, while at least two thousand Somali have crossed into Kenya in recent months, and a further four thousand have entered Ethiopia since the beginning of 2017, all in search of humanitarian assistance. Earlier this year(2017), the government of Kenya sought to close Dadaab and send Somali refugees home. This position is fueled by insecurity fears that are rooted in the idea that Al-Shabaab is using the refugee population as its base of support to carry out violence inside Kenya. A substantial portion of Al-Shabaab militants are currently believed to be recruited in here, including both nationals and immigrants/refugees. In support of the process, one thousand eight hundred and thirty-six refugees were helped to return to Somalia. In total, twenty-two thousand three hundred and fifty-one have returned since January.

Climate change in the different areas has also caused a trickle-down effect to the education system. The drought has impacted majorly on education with UNICEF reporting that 79,807 children in Somalia are out of school and one hundred and seventy-five schools in Ethiopia have closed due to drought. Humanitarian aid has also been hampered especially in Southern Somalia where Al-Shabaab is still controlling. In these areas, most of the children who are now out of school are trying to move to other regions including Mogadishu where they hope to get support. Al-Shabaab has claimed to be providing support in the Lower Shebelle region. A pro Al-Shabaab radio, Al-Furqaan has mentioned that they have coordinated relief in six administrative regions.

The impact of migration and movement as influenced by climate change and violent conflict affects all the countries in the Horn of Africa. Though Djibouti has seen less violent extremist activity than other countries in the region, it has an increased inflow of refugees escaping conflict in neighboring Somalia, Yemen. On 24 May 2014, two Somalis conducted a suicide bombing at a restaurant frequented by foreigners, killing one Turkish national and injuring more than 20 locals and foreign nationals as punishment for the participation of Djiboutian troops in the African Union Mission in Somalia and the Western military presence in the country(UNHCR, 2015). In Ethiopia, the high levels of internal migration results from political instability, war, famine, drought, poverty, environmental degradation and economic decline. The conflicts in South Sudan and also in western Sudan, particularly in Darfur, have resulted in significant numbers of people moving into the larger cities of the country, and particularly around Khartoum and Omdurman. The Internal Displacement Monitoring Centre projected that in 2015 there were 3.2 million displaced people within Sudan the separation of Sudan and South Sudan has resulted in the loss of citizenship for many people of mixed heritage, leaving as many as half a million-people stateless(Relief Web, 2017).

Violent extremist groups like Al-Shabaab , have acquired international status through recruiting and interacting with individuals across the borders. Apart from the porousness of the borders, easy migration and their close clan ties have allowed Al-Shabaab to recruit outside Somalia. It has made it easy for them to hold territories in some parts of southern Somalia and hinder the distribution of humanitarian support to those in need.With the engagement of Al-Shabaab as a humanitarian is playing into the sympathy recruitment from communities that see the extremist group as a solution to their problem. Though the literature in the region is skewed towards “Islamic” motivated forms of radicalization and recruitment, structural challenges, including underdevelopment and climate change contribute to the push factors leading to migration and conflict; including violent extremism. These structural problems form the fodder for narratives that are used by extremists to fuel the flames of terrorism in the region.

There is an interplay of conflict, development and violent extremism which calls for the significant strengthening of development and peace-building interventions. It is recognized globally that the financial, material and humanitarian costs of investing in prevention are less costly than dealing with the security crises of migration and movement or even counter terrorism(CT). The application of resilience from the environmental point of view when dealing with PVE – Conducive issues, would provide solutions. From the three-point circle developed by the UN; the policy and programs need to expand their reach to other avenues that cover PVE – Conducive areas to guarantee long-term gains and remain sustainable. Coordination of activities both at the national level and at the regional scale is essential. Finally, the importance of research cannot be overstated. This can include research on; migration patterns, relationships with extremist groups, sharing of lessons learned; especially from Demobilization, Disarmament and Reintegration (DDR), and conflict management strategies.