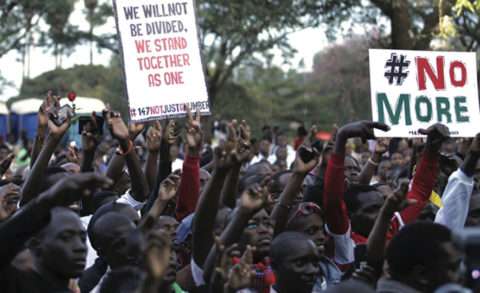 The United States Institute of Peace (USIP), in partnership with Scofield Associates, Sahan Research, and local interviewers, conducted two rounds of surveys and focus group discussions in Eastleigh and Pumwani in Nairobi, and Tononoka, Kisauni, Majengo Mombasa, and Kongowea in Mombasa. The first round of surveys helped identify unique community capacities in each community, and the second survey confirmed or disproved various hypotheses around resilience strategies. This study was conducted between October to November 2015 for the first round and February – March in 2016 for the second round. The representative sample of the study covers; the youth, elders, women, community leaders and the religious leaders.

The study determined the various community capacities that underlie community resilience to violent extremism, and understands if supporting these capacities can prevent violent extremism in Kenya. The understanding of how communities undermine and regulate violent extremist groups helps in reducing local risk and decreasing the improving vulnerability. This puts into consideration that there is ensured and more targeted support. Additionally, if core capacities and successful strategies are identified across communities, there is a high chance of creating an evidence-based foundation for successful preventive programming.

The study was part of other international efforts to understand conflict dynamics in local communities, and, more importantly, what capacities, strategies and actions communities take to prevent or manage violence. The key assumptions of the study were: Civic associations that work across ethnic groups help prevent or lower the level of violence, Communities that believe they can affect the security situation and act together to protect their neighbourhoods prevent violent groups from entering their neighbourhoods, Communities with pre-existing leadership structures that engage internally can resist violent movements.

Resilience is the abilities, actions and strategies communities use to manage or recover from a threat, shock or long-term stress, for example, election, criminal, gender-based violence. This study found that the following factors contribute to community resilience to violent extremism: Different community-led security groups that work together, for example, community watch groups, chief-elder administration, Nyumba Kumi; Intra and interreligious associations are important in keeping the structure of the community functioning and in check. Muslim Bonding/Christian-Muslim Association; Collective responsibility on the matters affecting the community especially on the issues of security. Collective efficacy, discussions on issues and community vulnerabilities to violent extremism including; radicalization, recruitment, and root causes; Manage youth-elder tensions – none did this well, but some communities had some successful engagement strategies (access to leadership and youth clubs in Tononoka, politicians managing youth-elder competition in Kongowea).

Communities that are resilient can also export their violence to other surrounding communities. The accumulation of community resilience capacities lowers the level of violent extremist activity. Respective elements of community resilience capacities are interdependent and thus must not be treated in isolation. For example, if a community can discuss violent extremism openly, it also increases trust across community groups and improves their engagement strategies; provided other efforts are significantly put-in-place to sustain trust building and those engagement strategies.

Communities should learn from other communities that have successful strategies and “resilience” capacity to manage violent actors and shocks. Additionally, Communities that learn to be more resilient should be careful not to push their vulnerabilities to other communities. There is need to adopt a comprehensive approach that recognize the interdependence among and within community capacities. Cooperative engagement should be enhanced through: a) Community-government relations which is crucial in preventing and managing violent extremism. b) Community oriented focus of the government officials in order to create the conditions for and protect community resilience, as well as to mitigate the threat of terrorism and violent extremism. c) Bottom-up security that builds community confidence to manage their own security and support inter-relating security structures that can engage with the police and government. The key bottom-up security should include but not limited to favourable community conditions to openly discuss violent extremist threats and activities as an avenue to developing and implementing a collaborative solution. Also, religious engagement on violent extremism must be inter-denominational.

The full report can be found on USIP site.