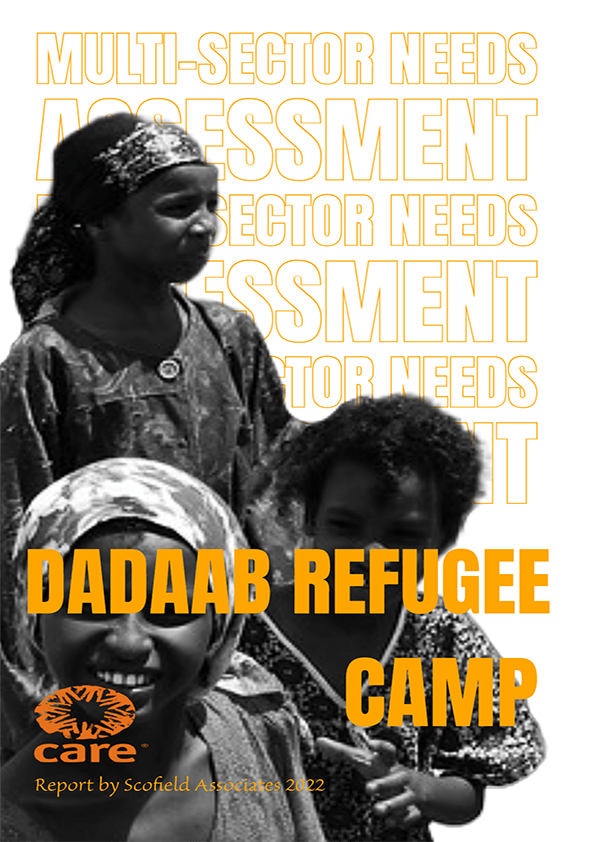 The Multi-Sectoral Needs Assessment study in the Dadaab refugee complex took a quantitative and qualitative approach.
The study includes disaggregation at the sub-camp level, with the demographics section providing details on arrival,
household heads and gender. It also details the country of origin and length of stay in the camp. This assessment targeted
seven sectors with questions focusing on the sector’s status, availability of resources and infrastructure to ensure each
work, access to the services, and the stakeholders involved.

The protection section, for instance, attracted good ratings, with the resolution of the cases as a practical way of using the
traditional mechanisms to resolve conflict. In addition, the presence of a single significant religious way of life in Dadaab
makes it easier for the refugees to find a standard reference on expectations. However, while this method seemed to work
on disputes related to resources, it had glaring gaps on the issue of sex and gender-based violence. For example, for most
women and girls, the aftermath of gender-based violence was marriage through a bride fine agreed upon by the families
in a cultural manner.

The assessment confirms that even with the religious standards and means of resolution, new conflicts will often emerge
between the refugees and the host communities. But, of course, this expectation is exercised with the competition for
economic opportunities and other limited resources. However, with better handling of disputes, the refugees in Dadaab
will always be harmonious in their engagement. For example, using protest letters to the UNHCR serves as an example
and a channel to voice displeasure. This option can be strengthened to reduce the possibility of confrontation.

Access to education remains to be a critical sector of consideration for the refugees in Dadaab. As a starting point, the
distance to the facilities is crucial, as these distances affect the movement to the facilities and engagement in studies. It
also impacts the other sectors of protection and security, as the respondents mentioned feeling unsafe on the way to
access certain services. On incomplete attendance to school, 30.39% of the boys had insufficient attendance as they were
engaged in domestic chores. In addition, 15.85% of the respondents mentioned that they could not purchase uniforms
and stationery, with 12.22% and 9.66% of the respondents citing that they had children that were too young to attend
school and unable to pay school fees, respectively.

The analysis concerning SGBV, non-attendance from the girls, had respondents selected the forced marriage category at
6.19% compared to 0.33% of the boys. The qualitative data also provided some insights on the issues related to sex and
gender-based violence. Culture came into play, especially within the Somali community, when there were SGBV issues in
the camp.

Refugees across the sub-camps in Dadaab rated the food as their topmost priority within the households. It is followed closely by water and information on camp closure. Interestingly security came in fourth in ranking as a priority need. Most respondents mentioned that assistance was insufficient to meet their needs at 26.1% and 21.7% in Ifo and Dagahaley, respectively. The respondents also noted that the help caused tensions in the households at 8.7%. Most refugees owned the refugee alien cards issued by the Government of Kenya
(GoK) at 49.25%. Others had a Kenyan birth certificate at 20.51% and proof of marriage at 7.38%. Only 0.84% of the refugees had no identification type in Dadaab.

To cope with the challenges that food availability brings, the families opt to look for casual jobs like washing clothes, borrowing from family and friends, begging, and reducing their meal consumption. 44.86% of the respondents in Dadaab depend on Food Vouchers from the UN and other organization initiatives like Bamba chakula. However, the respondents alluded to the fact that they usually substitute food rations with purchasing food on credit at 30.83%, cash at 9.27%, with instances where food is payment for work at 1.5%.

The refugees strongly proposed to have the cash for food approach to give them choices and power over their preferences. The food consumption score varies across the sub-camps. The analysis done at the sub-camp level showed that 16.54%, 3.94% and around 2% of the households in Ifo, Dagahaley and Hagadera, respectively, had a poor consumption score. It is in comparison to 21.26%, 13.39% and 11.81% in the three sub-camps with an acceptable consumption score. Multiple donors and implementing partners have invested in the WASH sector. At the refugee level, the Water Users Association, elected by the respective blocks, manages the water resources. The key informant interviews stated that all the water across the camps came from five active boreholes. A dipper review of the sub-camps showed that there were two water points in every block in Ifo, with seven boreholes in Hagadera. Of the seven, only four were working, with the
rest having collapsed.

The cost of water is different between the sub-camps depending on the availability and quality. For example, the price of a 20-litre jerrycan of water was lower on average in Dagahaley at Ksh. 0.34 as compared to 3.99 in Hagadera. This cost may be attributed to the solar pumping and storage of water, as mentioned by the qualitative respondents. The average water usage in the subcamps was also analysed, with Hagadera showing a higher water usage at 92.8 litres per day compared to 59.9 litres per day. This data indicates that each household collects an average of between two to five; 20li jerrycans of water daily.

The gender roles were revised depending on the scarcity, and distance to access water also arises on the distance factor. Handcarts are used where the distance is far, mainly due to shortages. The gender dynamic is that, where water is readily available and within distance, women do the fetching. When water is unavailable and must be fetched from far, men undertake the duty of bringing the water. The demographic concern is that young men – boys – are the ones that convey the water using the handcarts as compared to older men.

Cultural practices have assisted in water usage, especially in latrines. The household analysis showed that pit latrines without a slab were the options for sanitation at 58.69%, open holes at 22.45% and bucket toilets at 11.39%. While religious practices support handwashing behaviours, children need constant coaching, as data shows them non-compliant with handwashing. However, the availability of water within the toilets is commendable. The Somali culture supports water use values in all hygiene processes, which has contributed to the hygiene across the households and even the latrines.

Health awareness is vital. Trust in the medical service providers can only be bolstered through awareness and confidence building in the health sector. But unfortunately, the resilience of the health systems in Dadaab is wanting. The analysis from Covid-19 showed an overwhelmed medical system, with hospitals unable to provide adequate services, including a laboratory for testing and medication for those affected. With only one partner mentioned to be giving screening, another pandemic-like outbreak could paralyze the entire health system.

Shelters within the camp require some work. Some structures may not withstand natural calamities like strong winds, floods, and heavy rains. The primary source of cooking energy was firewood at 98.9%, followed by charcoal at 0.75%. Electricity was also in use, as mentioned by 0.20% of the respondents. As analyzed, 26.92% of households, 26.92% stated that the impact of using firewood included the risk of being kidnapped while fetching it. Additionally, its access caused conflicts with the host communities at 24.57%. Other than injuries during collecting at 22.94%, the respondents also mentioned health issues 9.26%, and lack of school attendance 7.79%.

With 32.83% of the respondents alluding to having no source of employment, it is safe then to presume that the household survives on multiple avenues and sources of income to meet their daily needs. On the other hand, 19.8% of the respondents stated that they depend solely on humanitarian assistance. The dynamics surrounding the opening and running of a business require permits, but 11.53% of enterprises allude to the fact that they cannot afford the money necessary to acquire the same. As a result, the livelihoods can improve, but basic things like registration and language can go a long way in enabling the refugees to seek employment and run their businesses.