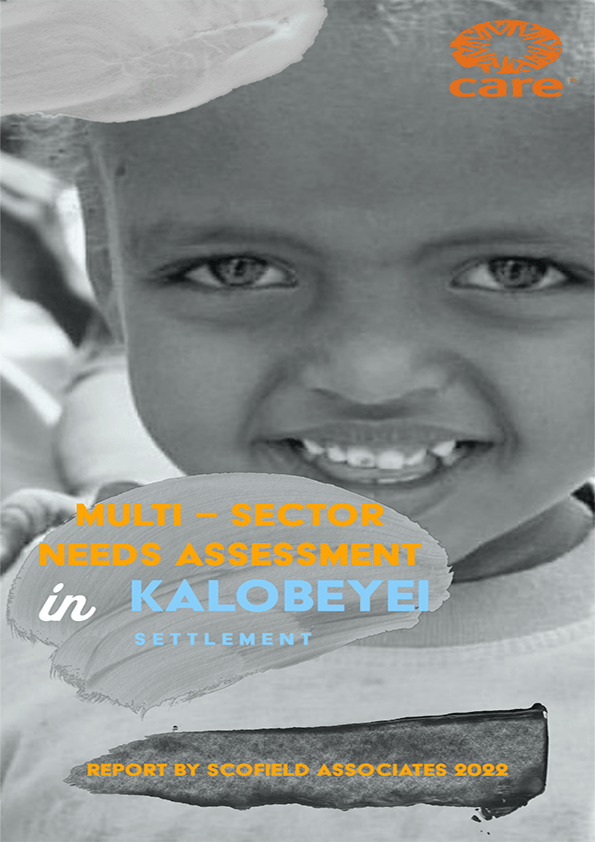 Kalobeyei integrated settlement is one of the new areas demarcated for refugees in Turkana County. The area has three villages that host 44,953 refugees and asylum seekers as of 31st May 2022 (UNHCR) . This study sought to understand the dynamics of the sectors within the humanitarian space in Kalobeyei.

The methodology encompassed an analysis of secondary and primary data. In addition, fieldwork that included quantitative and qualitative approaches was conducted from 16th June 2022 to 26th June 2022. The investigation, therefore, culminated in a detailed complimentary report incorporating data from household surveys, key informant interviews and focus group discussions.

The demographics covered in the study include 443 households, with 25.61% male and 19.82% female. A total of 36 respondents participated in key informant interviews and focus group discussions. An interesting finding in this camp was that over half of the male respondents asserted to be heads of the households but acknowledged that women were the breadwinners. Owing to its recent establishment, Kalobeyei has the highest number of unregistered refugees and asylum seekers, which can be directly attributed to most of the inhabitants being new arrivals.

The joint initiative from UNHCR, the national government and the county government of Turkana can be credited for the refugee status regarding access to services offered by the GoK across the sectors. From the data collected, Kalobeyei was ranked higher than Kakuma for access to healthcare services, food assistance, education, water and sanitation, protection, and employment, all averaging 9.1%. It is characteristic of the joined initiative, which aimed at establishing a more dignified settlement and environment for the refugees and asylum seekers.

On sectorial analyses, some sectors like protection showed improvement, with some of the findings pointing to the safe spaces within the camps and the minimal insecure spaces. Women and girls, however, still face some form of violence from perpetrators who embedded their actions in traditional structures; hence the victims do not term them as violence. The reporting in Kalobeyei is positive and could point to positive relations between authorities and the refugees. However, the police should handle cases expeditiously, which remains a thorn in existing relationships.

Infrastructural improvement in both the health and education sectors is the primary need. The schools may be available, but the student equipment remains a problem. It is evident from the findings that improving these critical sectors impacts livelihoods due to reduced expenditure by the refugees.

The covid-19 pandemic remains a significant hindrance for the refugees and asylum seekers in their bid to get services. For example, registration processes were delayed because of the pandemic, as shown by 8.6% in Village I and 1.6% in Village III. On the other hand, the positive side of proper messaging on the pandemic ensured that 21.8% took up wearing masks seriously, with 0.6% opting to stay at home.
Water remains to be a scarce resource in the camp. The analysis shows that based on the water use per day, their resource cost is also higher, thereby eating into the income issues for the refugees. In essence, the refugees in Village I use an approximate cost of Ks. 38.23 per day on the water, compared to Ks. 9.12 for the same commodity in Village III. Additionally, 26.10% of the refugees do not have enough containers for carrying water, directly affecting the time taken, as alluded to by 26.09%.