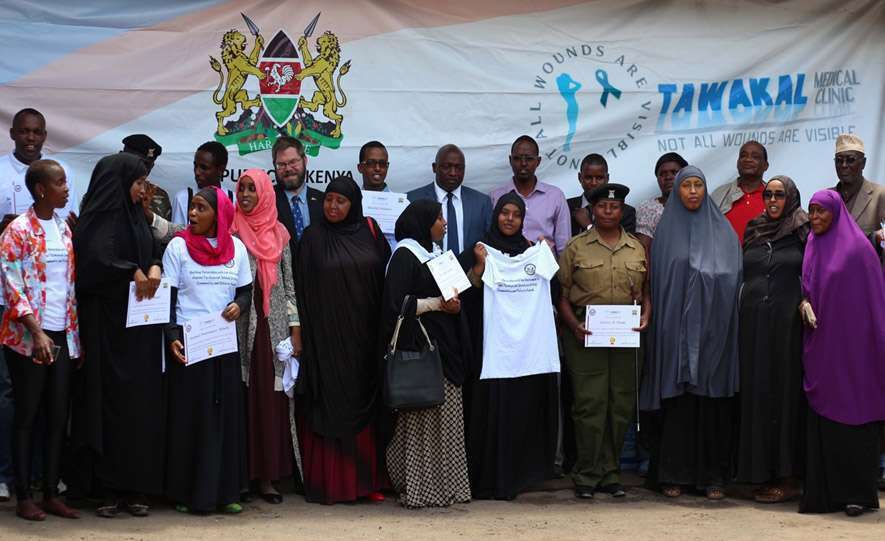 “The broadness of counselling makes it necessary to outline specifically what to look for in P/CVE counselling.”

Kamukunji constituency and more so Eastleigh has had its fair share of attacks and operations meant to flush out extremists from within it. The Usalama watch, acclaimed as one of the most ruthless operations in Kamukunji, have created a gap between the community and the law enforcement agencies.

There is evidence that such operations among others, target ethnic group and pull-back the gains of various CVE program and activities implemented in such an area.[2]  A recent study by United States Institute of Peace (USIP) looking at community resilience to violent extremism shows that relationships built through recognition of law enforcement teams at the community level helps in countering violent extremism. This is because the community easily shares information without fear of victimization.[3]

The relationship building as stated above, until recently by the CTI program, have not been considered, with respect to program implementations in Kamukunji. To this end, the CTI program was born with the aim of building partnerships with law enforcement to expand psychosocial services for at-risk communities and police in Nairobi.

Scofield Associates (SA) in partnership with Tawakal Medical Clinic, implemented the Community Together Initiative (CTI) program in Kamukunji (Eastliegh North; Eastleigh South) between October 2015 and December 2016. The CTI program ensured a fair representation of the male and females in its activities representing a 2:1 ration consistently all through the program.

Though the program was not able to achieve its results fully, the impact of this activity is still being felt as the relationships between the community and police, have continued even through social media where the support groups have formed a What’s-Up discussion forum to talk about issues that affect them in the community. Flexibility on the part of the program was an advantage as the issues and activities could be suggested and controlled by the members of the community.

One such example included a community discussion forum between gang related youth groups as the first practicum and exercise of alternative dispute resolution in the community. This meeting which was also attended by representatives from the law enforcement team ensured that tensions between the two groups and with the police, are reduced.

On the other hand, this flexibility ensured that priority is given to some activities and no other based on the time available, cost and impact. To this end, most of the meetings at the police station that would have otherwise required more time to set up, permission and approval requests and more costs were scaled down to informal meetings and discussions.

A conducted baseline study and an end-line study sampled 40 individuals each for the CTI program study. The sampled size for each of the study consist of 32 non-law enforcer (NLE) and 10 law enforcer (LE) i.e. 75% NLW and 25% LE all spread across the 5 wards in Kamukunji.

The baseline study showed that non-law enforcers would share security information among themselves because they feel they best understand each other and avoiding getting into arrest by the police for what they knew nothing about. The interviewees gave instances like the case of Westgate where some members of the community had information through rumors and decided to warn fellow non-law enforcement members at an individual level instead of passing this information to the police.

The data also indicated that there is a linkage to stress leading to psychological trauma and violent extremism. The Community Together Initiative program understood the arguments made by different scholars including Martha Crenshaw’s assertion that terrorism is not associated with being mad, and that stress and trauma in the community are the vulnerability which is exploited by extremists for terrorism.

To this end, the program also stressed the need to include counselling in its activities as a way of bridging the gaps and developing dialogue between the two groups.

The study found that: 1. The community witnessed an increased (15% compared to the baseline value) understanding of what counselling means and also recommended counselling as the pillars of CVE;

2. There is increased (7.5% compared to the baseline value) relationship building between the community and the police. But the level of relationship is still below average;

3. There is reduction (7.5% compared to the baseline value) of police – youth division. However, the level of division is division is worrisome considering that the reported level of disconnect is still high 42.7%; 4. While there is reduced percentage in information sharing between the community and the police especially on security issues and terrorism (42.5%), the nearness to the August 2017 Kenya election may have been attributed to the current election fever that has made the area politically polarised.

The key findings indicate that:

There is link (75%) between stress and VE. The pressure on the what causes stress is on the rise; and those causes of stress include but not limited to a) Family/work/social issues b) Health disability/disorder/drugs and c) Financial/unemployment. While significant number of individuals have no means to cope with stress, those that do, usually use social relationships health fitness and counselling.

The CTI programme recorded a decrease in the use of drug as coping mechanism. While the CTI recorded an increased awareness on the presence of counselling facility within the constituency, majority of this is attributed to the Tawakals’ presence.

This point out the fact that there is less presence of counselling facilities in Kamukunji. Counselling is an instrument of reformation to actual and potential law offenders,[5] through positive changes in attitude and motivations. The broadness of counseling makes it necessary to outline specifically what to look for in CVE and PVE counselling.[6]

And thus the need for clarity on what should be specifically targeted while engaging in counselling. Issues that are peculiar to CVE heavily revolves around enhancing the socioeconomic capacity and resilience of the community as stressed by the CTI study. The achievement of this enhances and facilitates relationship building within the community, and among the police and non-police in the community.

A good police-community relationship enhances intelligence sharing from the community to the law enforcer and averts potential violence. The absence of such relationships makes it difficult to track actions of violent extremist since the number of law enforcers cannot be equable to one-to-one monitoring of the population in a society. Generally, the law enforcers are considered unfriendly and hostile.

While CTI effort to address this was low due to time frame, the CTI was able to slight increase the release of information to LE and reduce in physical abuse by LE. The study noticed a paradigm shift from physical abuse to corrupt practices based on the fact that individuals are willing to buy their way out from been tortured.

While the brutality of the law enforcers is perceived to have reduced, there is an increasing shift towards corrupt practices, this could be related to the fact that more often, the citizen may have to buy their way off been harassed. Officers involved in violent arrests, investigations are likely to be stressed[7] and likely to engage in increased use of force, thus an increasing need for the police to be counselled as well.

CTI enhanced trust building among the two groups as seen in the decrease in stress created by the police, increase in information sharing which is critical to CVE, understanding the need to enhance cooperation among the two groups. The community strategy employed to deal with NLE-LE relationship includes friendly ambiance only when in presence of the police, protest, Nyumba Kumi and baraza (52.5%); and wearing disguised clothing and joining super power gang (5%).

However, the community (85%) recognize the need to engaged in anti-corrupt practices; be cooperative and friendly; engage in peaceful dialogue, counselling and sensitization; and report wrong doers to appropriate authority.

While the study stressed the need for police reform and soft approach by the government in dealing with VE, there is increasing need to have all strategy but more rising emphasis on soft approach is empirically evident. The study ultimately calls for mechanisms that:

1. Initiates anti-corruption and Cooperative forums: which strengthens cooperating with the police, refusing the corruption, politeness and avoidance of abusive languages and non-hostile communication, information sharing and view of the police as friend and members of the community as well;

Recommendation for future CVE engagement of the LE and NLE in Kamakunji stresses:

1. Expansion of the CTI program to continue a larger scale and include more members of the law enforcement and community;

2. Expand the curriculum of ADR to the officers alone first before immersing them in the community;

3. Development of linkages between the community and other police agencies like IPOA through new program through the creation of police accountability platforms that work with the Kavuludi team and the community at large. since the principles of accountability is fundamental in enhancing good police-community relationship and in preventing violence[8];

4. Have social activities that link up with annual events where the community can continually interact with the law enforcement teams. This can be through football teams.

[6] Horgan, J. (2008). Deradicalization or disengagement? A Process in Need of Clarity and a Counterterrorism Initiative in Need of Evaluation. Perspectives on Terrorism, 2, 4.

[8] Samuel Walker and Betsy Wright Kreisel, “Varieties of Citizen Review: The Implications of Organizational Features of Complaint Review Procedures for Accountability of the Police,” American Journal of Police, Vol. 15, No. 3 (1996), p. 65.