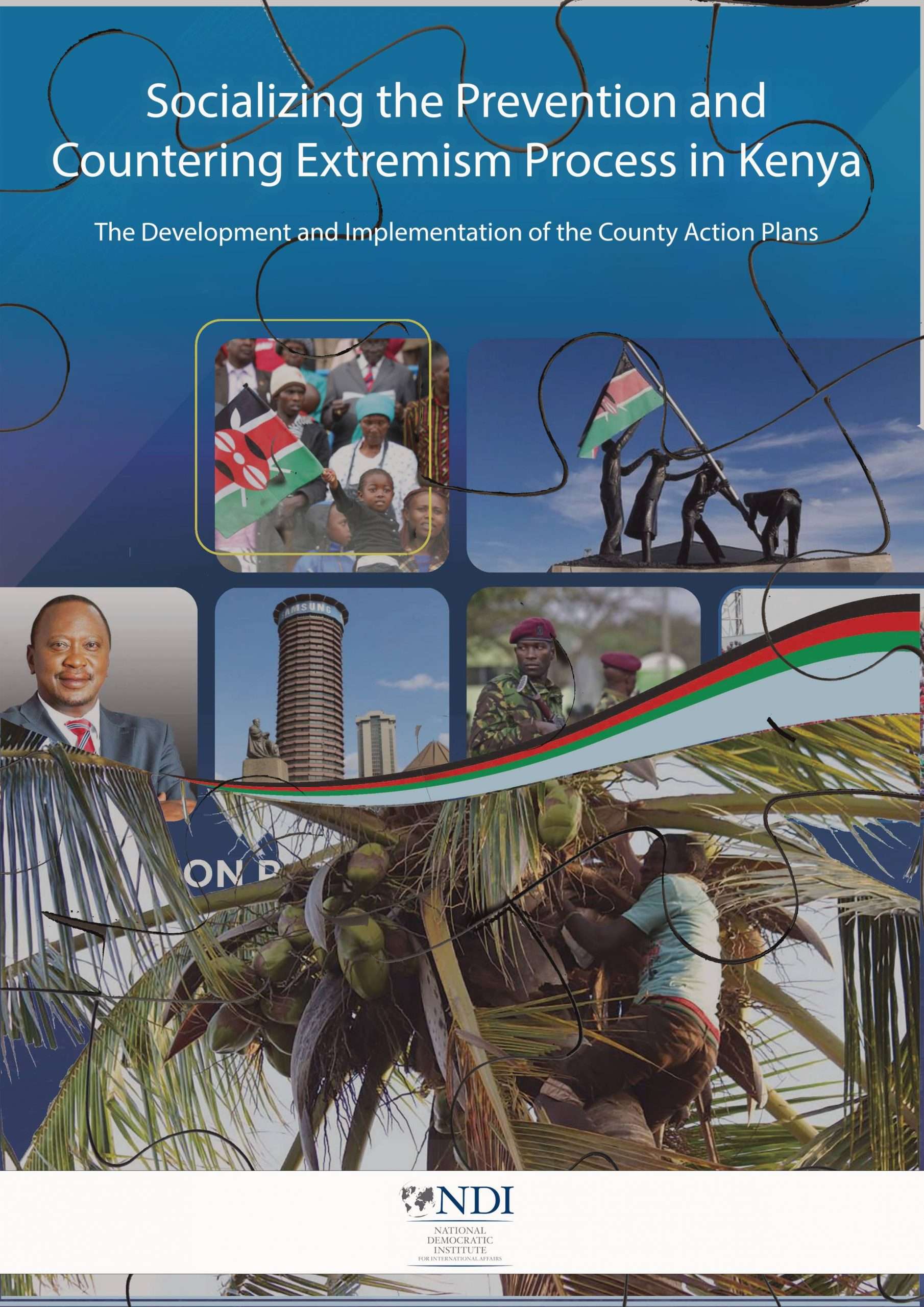 Socializing the Prevention and Countering Extremism Process in Kenya

The responses to violent extremism and terrorism interventions by development partners and governments are increasingly focusing on local actors through the engagement of civil society and the promotion of bottom-up responses from within local communities. These responses assume that expanding the engagement pool assists in de-securitization of the process and encourages the framing of violent extremism as a social problem.

This study explores how inclusive and pluralistic the dialogue processes have been in the counties in Kenya and whether these processes reflected the diversity of community groups, with a focus on two counties, Nairobi and Kwale, as case studies. It also analyses how members were recruited and whether the dialogue process managed to ensure meaningful participation by all groups. It further assesses whether the County Action Plan (CAP) development achieved government engagement at the national and county levels. Finally, it investigates whether the engagement enhanced state legitimacy and moderated state interaction with communities on the topic of violent extremism (VE). The study took place in the period between January and February 2021.

The two counties for the study, Kwale and Nairobi, were selected because the Kwale plan seemed to have more of a community-led process, unlike in Nairobi, which, by contrast, was a response to a presidential directive. Secondly, the Kwale CAP also provided an opportunity to gain experience since its launch in 2017, and the various iterations that included the Refreshed CAP, and new generation CAPs or the Rapid-CAPs (R-CAPs). It was also interesting to note that although national government conversations on preventing and countering violent extremism were led by Nairobi County, which is the government’s central hub on matters related to security, it was among the last counties to develop a plan.

The research utilized grounded theory that allowed for a theoretical sample size selection to fill and check the properties of a tentative category. In the selected sample we tried to include some representation through gender allocations and cluster categorization. The sampled categories included representation from the local government, civil society organizations, traditional leaders, women, youth, donors, and political party representatives. A total of eighteen respondents from Nairobi and seventeen from Kwale were interviewed using a key informant interview protocol.

The analysis adopted a constructivist grounded theory approach that emphasized multiple realities, including the roles of researcher, and researched and subjectivities of situated knowledge. Additionally, some level of comparison was used to evaluate the level of engagement using three groups of interrelated themes. These themes included meaningful participation and inclusion, political space and pluralism, and intersectionality and resilience. The themes also provided a lens for analysing the ownership of the development process, and the progress during implementation. The grouping of the themes was based on their interrelationships, to make the case that having one theme depended on the others in the category to be sufficient. The study showed both positive outcomes from the development process and glaring gaps which would affect the implementation process.

A top-level systems’ analysis shows that the development of the CAPs resulted in coordination success, which may aid in preventing and countering violent extremism (P/CVE) responses in Kenya. All sides of the stakeholder category (national government, county government, and communities) built mutual understanding of each other’s positions on what needs to be done to respond to VE, the multidimensional nature of VE, and the level of the VE threat to Kenyan society.

Secondly, civil society achieved enhanced recognition as a player in responding to violent extremism. This resulted in regular outreach by national government and county government to civil society organizations for engagement and support on activities. However, this outreach can also be argued to have taken place only because the national and county governments have limited financial resources invested in the CAPs. Additionally, the County Engagement Forum (CEF) has tried to bring together the two levels of government with civil society whenever possible; previously, they were seen as working on parallel tracks when responding to violent extremism. Thirdly, there was an increased understanding by the government that VE is neither highly legalistic nor a security issue only. The CAPs expanded government understanding of the P/CVE response in the community to allow for a conversation on structural imbalances as drivers of VE. Finally, the CAPs helped the donors to focus their funding when responding to VE, resulting in the streamlining of the VE funding pool in the country.

While the CAPs provided successes in the community, there are pressing gaps that remain. The county governments have not successfully conveyed their security issues to the national government. For its part, the national government has not been able to align the community and county voices into national legislation and P/CVE policies. The analysis shows missing links between the county government, national government, and civil society. These remaining gaps demonstrate the need for pluralistic and inclusive engagement of other stakeholders to achieve a whole-of-society process. This was evidence of limited inclusion to a complete lack of meaningful participation during the development processes in both counties.

Second, the presentation of the problem in the CAPs encourages dependency even within government, leaving the financing to come from the development partners. The CAPs remain a mandate from the national government, which is to say that the national government remains the dictating authority rather than a partner in the process. Additionally, while politicians may provide avenues for reaching vulnerable communities, they are perceived as threats by the same communities. While this is the case, more research is required to provide a better understanding on the role of the politicians, political space, and the prevention and countering of violent extremism. Third, and under the political space, the conversations on anchoring the documents in law remain challenging. Most of the counties have concentrated on looking for legislation for financial support for the CAP activities. However, pressing issues relating to amnesty, returnees, and reintegration remain unaddressed.

Forth, the CAPs assume community resilience and the interaction of factors leading to violent extremism and terrorism, rather than expressly trying to promote and analyse these factors. In their current form, they push communities to fit their challenges into an existing conceptual framework, with no genuine option for local solutions to the local problem. The local capacities were ignored either intentionally or unintentionally as the relevant thresholds of both rural and urban communities were included during the development process. Opportunities to build resilience are available during the implementation of the CAPs and can be better exploited.

Fifth, the needs of the development team, donor restrictions on the use of funds for engagement of at-risk groups, and time limits appear to be the influencing factors in the final CAP documents. The definition of inclusion was based on the often-repeated terms that categorize target populations as at-risk, rather than on a nuanced understanding of local stakeholders in the counties. The nuanced approach can only happen if the term “at-risk” as used in the document is not repurposed as a marginalization or branding tool for hard power approaches from the national government. However, the conventional definition of those who are at risk for recruitment into VE groups (hereafter, at risk/at-risk groups) cannot apply to the dynamics of VE. Sixth, ownership remains a problem. This is partly because of limited participation, but also due to language barriers. All the CAPs are developed in English, making it difficult for local communities to interact closely with the document.

Overall, the action plans have generated ideas that lack empowerment tools for responding to VE in Kenya. This study therefore recommends the following: