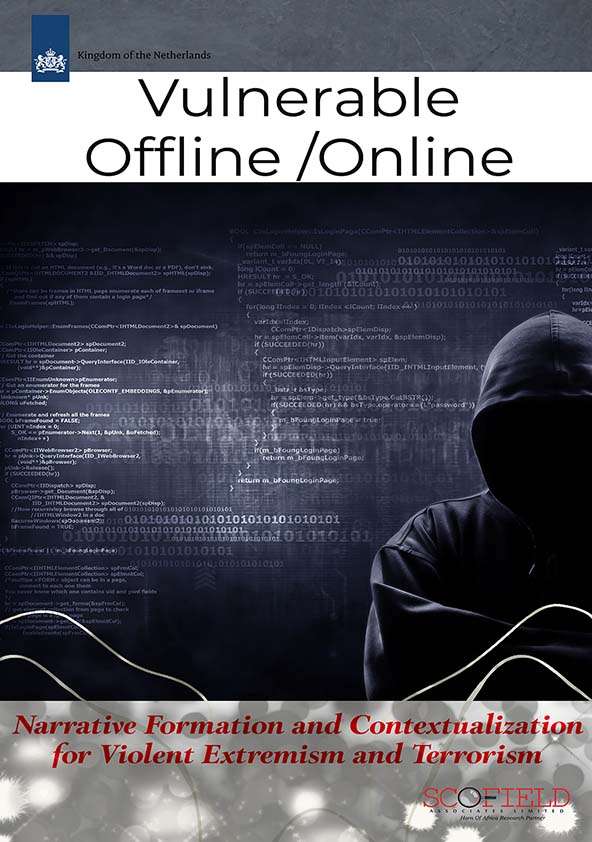 Modelling, Meaning Application and the Spread of Violent Extremist Narratives in Kenya.

As social beings, humans are naturally born story tellers, who use narratives to lend meaning to everything around them, as an invaluable means for the persuasion process. Narratives are highly interconnected and utilize different spaces to influence violent extremism. Such spaces include offline and online environments, where they shape and stabilize social power structures. They have powerful mental models that affect various dimensions and levels of human interaction. Additionally, narratives depend on context, as they have a dual role of culture organizing and sense-making. They serve as instruments, that are consciously or unconsciously, used to produce a social order, within the context of violent extremism and terrorism.

Over the years, practitioners and academia have persistently anchored narratives that influence violent extremism, on religious ideology. This endeavour has subconsciously overlooked the role of religious interpretation, which is used as a conveyor belt to seamlessly pass information, providing linkage of local issues to global discourses on violent extremism (VE). From an interpretive perspective, violent extremists have used religion as a self-contained system that provides an easy explanation to social, economic, and political processes within the society. They have targeted specific texts, ensured subtle ultimatum on the use of violence as a right, given context to specific discourses, and provided the obligation to action. By extension, such interpretations have also offered a separation of roles, the determination of actors, and a justification for the actions.

While local spaces provide the context and content for fact accumulation, religious interpretation therefore supply the linkage and association to the global discourses. As will be shown in the desktop review of the study, the global discourses in the Neglected Duty pamphlet, justified Jihad in its violent interpretation, as an obligation to the Muslims. The texts, which the report names as the genesis of violent-extremist narrative framing process, ensured that conversations and actions governing the “Muslim” community, aligned to specific requirements.

The internet has remained as a medium in the spread of the narratives. It has often been mistaken as a driver of violent extremism, rather than the medium that it is. The ease of access to social media spaces, has made it to be widely used in the Horn of Africa. Unfortunately, social media has not only been used to bring people closer, to share thoughts and opinions, but also to spread false information. Additionally, the application of privacy rules, has made it easier for closing the niche and advancing the targeting of vulnerable individuals. These privacy rules, through welcomed, have made the process of analysis for prevention; challenging.

It should be noted that the increased use of the medium maybe because of other unintended resolution from the private sector to advance their penetration to specific demographics through offering free service and other benefits tagged on privacy. The social platforms have become widely accessible, easy to use and free (in some instances). When a user’s account is deactivated or banned, the user can move their content to other platforms or accounts in a short period at limited to no expense. The COVID-19 crisis has further amplified the problem of malicious use of social media.

This report documents an analysis on the process of radicalization and recruitment through the narrative review lens. It focuses on the modelling, interpretation, and the spread of narratives in: Mombasa, Kwale, Lamu, Tana River, Garissa, Isiolo, Nakuru, Kisumu, Kakamega and Nairobi counties. While these counties have diverse realities and are all susceptible to VE, there are commonalities in narrative development, use, and propagation.

The study was purely qualitative, using a purposive sample and a snowballing technique, to target respondents that included individuals from Maskanis, Returnees, those directly affected, mothers of those that travelled to Somalia, university students and those incarcerated over VE related incidences. A total of 224 participants were interviewed, with 70% being male and 30% being female. Additionally, 67% of the total sample were Muslim, 32% Christian and 1% being denoted in the category other, across the 10 counties. The study also borrows a lot from a desktop review of existing research materials on narrative development and spread from the global space to the local communities in Kenya.

The online component of the study focused on the data collected from Twitter over the six-month research period. A total of five million tweets were collected. These tweets included keywords and hashtags focusing on violent extremism and terrorism. While the study anticipated data collection from Facebook and Telegram, the restrictions on their APIs ensured that this process would not be completed. Analysis for the data collected from Twitter followed a second level random sampling that ensured an average of 1800 tweets were selected for the Social Network Analysis (100 random tweets per analysis for three days a week in the six months), Word-Cloud, and Sentiment Analysis.

The findings show that narrative formation depends on three major attributes; having a believable story, actionable plans for those who encounter it, and the need for a religious cover. The third characteristic provides support to the persuasion process and adds to the global whole. The persuasion process plays out very well with an online platform or audience. Contextual factors from the community make the stories believable and relatable. Each narrative requires a call to action and actors who are either branded as an enemy or an ally. The religious interpretation then supplies the cover that links the provider to the recipient, depending on the context.

Second, narrative sharing is goal-oriented and organized around sets of hierarchically ordered preferences. The findings from this study confirm that all narratives are imbued with intentions and objectives, whose persuasion level increases depending on the targeted vulnerable individual, and their level of socialization.

In the ten counties, four goals were presented including: Narratives for recruitment that focus on the benefits of joining the fold using the economic gains; Narratives targeting sympathizers—preying on the empathy and pain to the Muslim Ummah; Morale building Narratives that utilize audiovisual medium to show heroism; and finally, Narratives on Jihad and Hijra that focus more on individuals who are already in the fold and are willing to act.

Third, the idea that narratives can be categorized further for a targeted response was explored in the analysis. The findings have included four more categorizations based on the rewards to the vulnerable individuals. These include: Takfiri modelling of a new self; justification of engagement based on the challenges of retribution and marginalization; and finally, the call to establish the Islamic State.

Forth, narratives of jihad have limited linkages and networks online, showing the possibility of having such conversations in persons and with higher up level of socialization. Additionally, the narratives from Al-Shabaab, on Al-Shabaab and by Al-Shabaab, have a lot of networks in general proving that the level of influence is not only linked to a single node sharing but multiple links and nodes passing the information to numerous individuals. Based on the twitter analysis, other VEO mention in the region attract linkages at a single node, meaning that they don’t gather interests like what Al-Shabaab has at present. In total, the narratives linked to terrorism have very limited linkages. This can be attributed to the non-agreement of specific actions to be linked to terrorism or not.

Overall, the sets of responses from Garissa and Isiolo reveal that, narratives fall broadly into the following three categories including, Narratives of retribution (and repression); Narratives of reward; and Narrative of self-determination. For the counties where the conversation and the socialization process have “matured,” the type of messaging focused more on the interpreted religious duty; the justification for setting up the caliphate; and the need for violent engaged. This was evident in Mombasa Lamu, Kwale and Nairobi. The counties of Kakamega and Kisumu, included limited narratives from the respondents. Part of this was because most respondents were Christians. Nakuru stood as an isolated county from violent extremist attacks and only featuring, in the discourse, as a transit point for violent extremism and terrorism. While the level of vulnerability to violent extremism in this county seems lower, the political pressures may improve the linkage to socio-economic gain narratives.

The report recommends a violent extremism identification and response framework by making the case that:

1.    All the narratives developed have a vulnerability targeting that often begins at a higher level within different contexts. At this level, there is an increased use of religious interpretation to supply the linkages to the global discourses. Online platforms are often used for this process and therefore remain critical.

2.    As the targeting moves from the region (high level) towards the individual (lower level) the lesser the religious cover is required and the more the contextual “facts” are required. This report calls these the resonance factors, as they make it easy for the vulnerable individuals to resonate with the issues as presented.

4.    While the messenger remains important in the response process, alternative narratives require a clear understanding of the formation, goals, and categorization of the narratives.

6.      Finally, the development of alternative narratives requires a story with facts from the context (depending on the level of targeting—high or low), pointers of action, and actors that the target population can relate to, when interacting with the message presented. A message that lacks these attributes remains functionless and ultimately fails to achieve the intended objective.